At the After-School Program that I serve, I had students to participate in the Ping-Pong Ball and Soda Bottle Activity as a Fun Friday Choice Activity. The students were excited to participate in a ‘special experiment’ with me. Originally, I wanted the activity to be done with our 4th-5th-grade students (ages 10-11), but the 1st and 2nd-grade students (ages 5-7) wanted to be involved as well. The first activity that we did was the Ping-Pong Ball Activity. I started off by giving the students simple directions and creating a competition out of the activity. 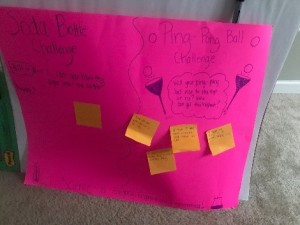 My instructions were using the funnel (it must be near your mouth) and the ping-pong ball, try to get your ping pong ball to rise to the top. You may create a mouth guard if you like, but this is optional.

The challenge question was will your ping pong ball rise out of your funnel, and who can get their ping-pong ball to rise the highest. With these instructions, students immediately begin to make a mouth guard and blow directly into the funnel to get the ball to rise.

One student said, “how do we get the ball to the top?” Another student said maybe we are not using enough strength. I began to ask the students what they meant by the word strength and what made them say that particular word. The students said the air that they were blowing through the funnel was not strong enough. I knew what they were really meaning was pressure. I encouraged them to use scientific language.

So, I asked another question, “is there something that is stronger than the air that you are blowing out?”. The students responded that the ball was stronger. I went back to my original directions after students tried a few times and highlighted that I never gave specific instructions to blow into the end of the funnel. One student shouted it, “wait! I got it!”. They grabbed the funnel and ping pong ball and begin to blow inside the top of the funnel that is when the ball began to rise. The students said this activity was fun but stressful. 😊

The last activity was the soda bottle activity. The goal was to be the first person to blow the paper into the bottle. The students began to ask, “Ms. Andy is this a trick like the last one?”. I chuckled and explained the last activity was not a trick. This activity went a lot faster than the last. Students started off trying to blow directly into the bottle, which the paper ball either fell out of the mouth of the bottle or did not move at all. One of the students, Emily, asked the question, “Ms. Andy, if we blow the paper from the mouth, we are just blowing air into the bottle, pushing the bottle back, right?”. I was blown away and the other students just stared at me curiously. So, I asked the question why do you think that is happening, be sure to use scientific vocabulary. One of the 5th-grade students said, “Because there is more pressure going into the bottle, than on the paper.” The students begin asking questions like how can we get more pressure onto the paper ball, should we blow on it from a different angle? One student moved to the side of the mouth of the bottle and begin to blow. The paper fell inside the bottle.

Greetings: My name is Andrea S. Pickens; I have several years of experience in education and youth development all of which include teaching and leading youth in under-resourced and economically disadvantaged communities. I believe that it is critical to the academic and over success of our youth to have proper academic and social-emotional support. This support is often found in schools and after-school programs that intervene by providing tutoring/enrichment services and are equipped with effective teachers and leaders. My belief is that each child can learn, but not all children learn the same; diversity and equity is crucial to youth development. It is my mission as an educator, entrepreneur, and servant-leader to equip and empower others in youth development and education to reach our youth beyond the secondary classroom. Yours in Education, Andrea S. Pickens, M.Ed View more posts